“My mom blessed me,” OBJ told USA TODAY Sports after his first training camp practice with the Cleveland Brownson Thursday, snapping back his orange hoodie and gliding his fingers through his wavy, jet-black and short do. “I’ve got the premium up top.”

Wow. What a new look. Gone are the blonde, signature twists.

Yet it is so obvious that Beckham, 26, can still make a bold statement.

The scope of Beckham’s dramatic new look — and offseason that included the blockbuster trade in March from the New York Giants — was reminiscent of last year’s news when he went to the Holy Land. He was baptized in the Jordan River to make another type of statement.

“I just wanted to cleanse myself,” he said of that trip. “It felt real good.”

For a thoughtful man who was initially taken aback by the deal that sent him from the Big Apple, the star receiver seemed fully at peace as the Browns opened camp. He’s processed how it all went down and embraced this new chapter in his life, which reunites him with his best friend, Browns receiver Jarvis Landry, and connects him with one of the NFL’s best young quarterbacks in Baker Mayfield.

No, Cleveland doesn’t have New York’s glitz and glamour, but you won’t find a more passionate fan base than you get with the Browns.

It was hardly surprising that when Beckham bolted from the locker room before practice, the fans showered him with their loudest expression of the morning.

Then practice started and he really gave them something to shout out.

About an hour into the work, made a sideline catch after bobbling the ball — while on his knees, with a cornerback draped over his back. He stayed inbounds. In this case, two knees equaled one-hand catch on the sizzle meter.

Sure, the circus may have come to town with all the hype and expectations surrounding an emerging team that some are projecting as a potential Super Bowl contender — even as it carries the NFL’s longest non-playoff drought — but undoubtedly the circus catches are here.

“Nah,” Beckham replied. “I expect to make all those catches.”

That’s why Mayfield, asked about it later, grinned and called OBJ a “security blanket.” Mayfield an electric talent in his own right, but with Beckham he is instantly much better.

No one in NFL history reached 5,000 receiving yards faster than Beckham (59 games), but no need to bore you with the stats. Beckham knows this is bigger than the individual numbers.

Ultimately, this team dream thing with the Browns comes down to W’s. Talent is no longer an issue or excuse. Chemistry is key factor, which puts Beckham at the epicenter of whatever culture — to use a favorite term of a certain NFL GM — the Browns establish.

Fair or not, Beckham will be a target. Given the hype and hope, he might even be under more pressure to produce as a bigger fish in a smaller pond than he was the nation’s largest media market. 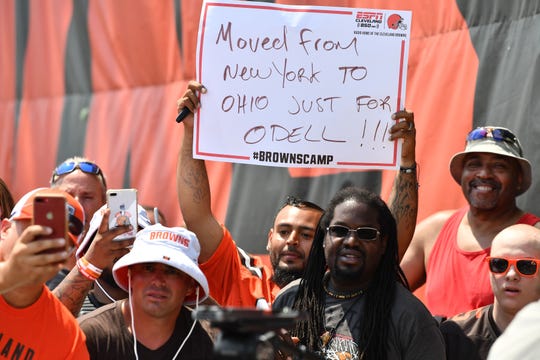 “I understand what you’re saying, but it’s something I can’t really get into,” he said. “I can feel it. It’s just something you can’t really worry about.”

Instead, he continued, it’s a matter of staying focused on the football work, like X’s and O’s and developing chemistry with Mayfield, than tripping on the buzz factors. Besides, he won’t dispute the notion that he is poised to be a better leader in the new Browns culture, given the stature he’s earned as arguably the NFL’s most dynamic playmaker and the maturity and experience gained in five NFL seasons.

He and Landry have talked about the leadership. Landry told him that in positional drills, OBJ should lead from the front and he’ll lead from the back.

Beyond that, Beckham said he’ll bounce from table to table, sitting with different teammates during every training camp meal, in an effort to get to know his teammates.

“These are the guys you go to war with,” he explained. “No disrespect to the coaches or anybody else in the organization, but when the whistle blows, it’s just us out there. So, you’ve got to know who you’re battling with. We’re all fighting for the same goal. I’m excited to be able to learn new faces.”

As much as Beckham couldn’t wait to get to this point — Landry teased him about it in the huddle during practice — this is only the beginning. The tougher tests for leadership-by-example will come later. You’ve seen the occasional sideline blowups from the intense competitor.

Beckham acknowledges that it’s easy to have a certain chill factor this time of year.

“I could come here and say whatever, then get into the heat of the moment and you don’t know what’s going to happen,” he said. “So, for me internally, it’s to see where I’m at, at this moment.”

Which might be at the launch pad for another type of blast-off.

How to Exercise the Right Way: 10 Steps

Bodybuilding Tips That Will Get You Faster Results!

Tokyo 2020 Olympics: With one year to go what are the key stories to watch?